“This study compared the effects of following a pacer versus following a self-paced plan on psychological responses and pacing behavior in well-trained distance runners. Pacing in the present study was individually tailored where each participant developed a personal strategy to ensure their goal time was achieved.”
.
“We expected that following a pacer would associate with goal achievement, higher pre-run confidence, positive emotions and lower perceived exertion during performance.”
.
“In a mixed-design repeated-measures study, 19 well-trained runners completed two 1600m running time trials. 10 runners had a pacer (paced group) who supported their individual pacing strategy, and 9 participants self-paced running alone (control group). Both groups could check pace using their wrist watch.”
.
“In contrast to our expectation, results indicated that the paced group reported higher pre-run anxiety with no significant differences in finish time, goal confidence, goal difficulty, perceived exertion, and self-rated performance between groups.”
.
“Following a personalised pacer might associate with higher anxiety due to uncertainty in being able to keep up with the pacer and public visibility of dropping behind, something that is not so observable in a self-paced run completed alone.”
.
C.L. Fullerton, A.M.Lane, T.J.Devonport
The Influence of a Pacesetter on Psychological Responses and Pacing Behavior during a 1600 m Run
Journal of Sports Science and Medicine – Volume 16 #4 – December 2017 – page 551 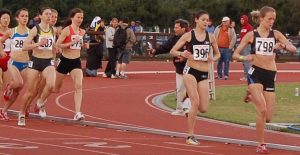