Sport Business……
What -not- to do.
To get -large- endorsement contracts in sport you must have a reasonably high level of name & face recognition among both folks in your sport and in the general public. It helps to have a relatively high level of –recognizability– in settings outside of your sport also.
Abderrahman Samba has been on television at professional track meets quite a bit over the last 2 years or so. Like many athletes in our sport, once he got “big”, he started wearing a headband and sunglasses. Likely the result of relatively small endorsement contracts.
Today even a hardcore track fan would have difficulty recognizing him if they were standing next to him in an elevator. That situation is why so many top track athletes over the last couple decades haven’t attracted large endorsement contracts.
.
Last weekend he ran 400m Hurdles in 46.98.
That makes him only the 2nd human in history to run under 47 seconds.
He is within 2-tenths-of-a-second of the World Record that has stood for 26 years.
He is among the best of the best in his event.
He gets huge camera time……with his face and head covered.
.
Large endorsement contracts in sport today are in abundance.
You think small, you’ll pursue small, you’ll get small.
You’ll get what track athletes tend to get because they tend to not think bigger and thus, they tend not to pursue bigger.
.
Take off the shades.
Take off the headbands.
In our sport, especially for American track athletes, make sure people in the choir know who you are before you complain that the public isn’t filling the pews.
That’s -your- job, not the job of some governing body.
Think business. Be a good business person.
Create recognizability.
Pursue things that increase visibility of yourself and the sport. You get that done for a while…..first. After that you can complain if you feel that folks at a governing body aren’t pulling their weight.
. 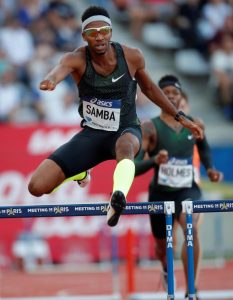