The quackery of -traditional- psychiatry & psychology in America.
Drugs, drugs, and more drugs…….
“I would say at least half the folks who are being treated with antidepressants aren’t benefiting from the active pharmacological effects of the drugs themselves but from a placebo effect, If people knew more, I think they would be a little less likely to go down the medication path than the psychosocial treatment path.”
Steven Hollon….Inappropriate prescribing….American Psychological Association, Volume 43 #6….2012…page 36
.
“Practice is not reflecting the research. Ninety to 95% of programs have no research base. The gap between what is known and what is being provided in routine care is huge.”
Kimberly Hogwood [New York Office Of Mental Health] Associated Press, The Daily Texan, April 11, 2002
.
“The U.S. mental health system is in crisis….according to a federal report.”
“The fundamental problem: emphasizing medicating people over fostering ways to help them lead productive lives.”
Associated Press, The Daily Texan [September 17, 2002]
.
“The difference between the effect of a placebo and the effect of an anti-depressant is minimal for most people……People get better when they take the drug, but its not the chemical ingredients in the drug that are making them better, its largely the placebo effect.”
Irving Kirsch [Associate Director Placebo Studies, Harvard Medical School]
.
“……the benefits that US health care currently deliver may not outweigh the aggregate health harm it imparts.”
Journal Of The American Medical Association…Volume 302 #1..July 1, 2009…page 89 – 91
.
“Most drugs are only effective for a small percentage of people who take them.”
[Michael Leavitt….U.S. Secretary of Health & Human Services 2005 – 2009]
. 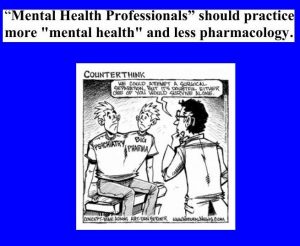 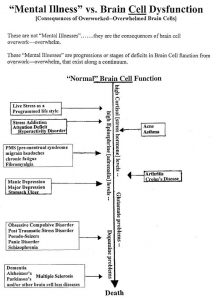