Prior to moving to Austin [December 1990], living at my parents house while coaching at the neighborhood high school [West Potomac high school, Alexandria, Virginia], I set up a room to function much like an office and lounge area for my coaching exploits.
.
Many of the runners I coached lived nearby and came over relatively often for formal group sessions or individually to yap.
.
I’ve been getting a series of reminders of that recently.
Among the 2 most notable of those reminders…..A couple months ago during a portion of a speech given by one of those runners [Gabrielle Pohlmann Patterson] at her Hall Of Fame induction ceremony.
The other most noteable one a few days ago…..Reading through a facebook “memory” thread. Lengthy thread, pretty far down one of my former high school runners posted a comment, December 25, 2018, excerpt…..
[Scott Smith]—–“Wow! All those times coming over for sports science education, meditation training, etc.”
.
I loved doing those sessions at the house, so its quite outstanding 30 years later to hear and see folks talking about what they got out of it.
.
pics…..
— Scott at the East Coast Cross-Country Championships on a cold day and muddy course at the famed Van Courtland Park in New York City, 1987 or so.
— Gabrielle Pohlmann Patterson this past October on day 2 of the Hall Of Fame induction.
— West Potomac boys cross-country team photo, 1986 or 87.
— My parents house back in the day at 2227 Wittington blvd, Alexandria, Virginia.
. 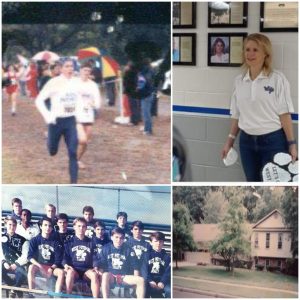