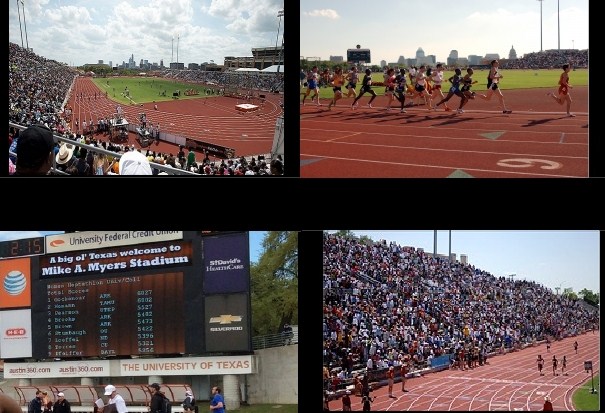 TheETG Annual Track & Field Meet Schedule is intended to provide a somewhat stable, predictable schedule for TheETG athletes, track fans, and media. It helps to address the issues of “follow-ability” and recognizability in a sport where traditionally athletes have had ever-changing race schedules, ever-changing uniforms, hair styles, and face coverings [a.k.a. sunglasses] that sabotage long term sport promotions. TheETG Annual Track & Field Meet Schedule is also intended to help promote the track meets on the schedule.

Track meet presentation. The in-person experience and the televised product. Improving and simplifying the presentation of our sport, particularly at the championship level is necessary over the long term as our sport continues to grow in quality and depth at the professional level. Over the long term, as much as we’ve resisted in the past, at some point we’re gonna have to move to a format for our major championship track & field meets where we place the qualifying rounds together as a group as if they’re part of a separate track meet, held earlier in the week. That, being followed by the finals on a Saturday and/or Sunday, held as if its a separate, stand alone track meet.

I’m proposing a quarter-final, semi-final, and final type of format where 1 or 2 days is designated for finals only. The quarter-final and semi-finals placed for all events in a Monday thru Thursday structure. Finals-only events such as the race walk, 10,000 meters and marathon could be spread across the weekend. Switching to a “finals-day” format provides opportunities for broadcasters to expand and deepen their coverage. And switching to this type of format inherently provides our sport with an opportunity to conduct our championship semi-final rounds as if they are a track meet unto themselves. Set apart on their own day[s] earlier in the week, providing our sport with an additional high value product to sell for tickets, television rights, in-stadium advertising, etc. And obviously in this day and age the rights to the quarter-final rounds can be sold to TV or online broadcasters.

Switching to the separate day format for qualifying rounds, semi-final, and finals provides for a better track fan experience, particularly for ticket purchasers. The track fans that purchase tickets will have a far better understanding of the product they are buying. Those that purchase tickets for finals will know that they don’t have to sit through qualifying rounds of some events, waiting to get to see the finals they are really there to see. Low budget fans can more easily choose a “semi-finals day” ticket and know that they’re still getting to see a high value product.

This format provides athletes and coaches an easier way to plan ahead for championship meets in every area from budgets, to tapering, to race day event prep. This format also allows athletes that are participating in more than one non-relay event to have days where they don’t have a final of one event followed by the opening round of another. They can get all the qualifying rounds out of the way, have a day off, then focus solely on their event finals.

High schools and colleges in the United States should also consider moving to this type of format.

In short, at some point its gonna be necessary for us as a sport to move away from the current model that scatters finals and qualifying rounds across several days to 2 weeks, forcing fans, TV viewers, and broadcasters to be experts at schedule reading to know which finals are happening on any given day. We have an opportunity present our sport in a more logical, easier to follow manner. We should fully embrace that opportunity.

Time for Track & Field to leave the Olympic Games

Its been a decade or so since some in our sport, quite wisely in my view, started discussing the subject of making our World Track & Field Championships a stand-alone focus of the sport. Doing so by making a formal separation from the Olympic Games. Achieving this by limiting participation of Track & Field athletes in the Olympics to athletes under 20 or 22 years of age.
Perhaps several issues with the Olympic Games is the universe telling us to get on with it.
Too expensive to host. Too expensive to attend. Ticket prices out of reach of the average citizen of the host country. Fewer country’s making serious bids.

Expensive venues sitting idle after the Games are over.
In the last 50 years the Olympic Games has been a blessing and a curse for our sport. The world stage every 4 years was the blessing. The rules of amateurism and branding issues were the curse. And in the United States in the 1970s when the NFL, NBA, and Major League Baseball were reaching escape velocity via sport promotions, branding, and athlete pay, we in Track & Field were stuck with the Olympics as a ball-and-chain around our neck. Branded in the public’s mind as a once every 4 years sport. All narratives being that any athlete training must be training for “the Olympics”, in the process of being an “Olympic hopeful”. So attached to the Olympic Games were we that we didn’t even have a World Championship.
We have a World Track & Field Championships. Even the first one in 1983 was worthy of being branded as -the- best track meet on earth. At some point we’re probably gonna have to end our codependent relationship with the International Olympic Committee and the Olympic Games. To be a stand-alone sport with a stand-alone championship. Maybe this is a good time to assert the World Championships, an event we control, to be the sole focus and stand-alone Championship at the top of our sport.

Medals at elite championships should be earned via elite level performances.

A certain type of consistent behavior across a period of years in the men’s hurdles contributed to forcing the creation of the “no false start” rule for everybody across all running events.  Given the consistent behavior related to the “strategic race” in the 1500m, perhaps its time now for a “no medals” rule. Maybe its time to set a minimum qualifying time for medals as well.

In the 1500m folks getting on the podium at a World Championships or other major championship having run the time of a high schooler or young college athlete. The concept of training hard, getting fit, then showing up on race day and treating the track like its a dice table in Las Vegas. Training hard getting fit, then setting it all off to the side, outta the way so one can jog most of the race and try to outkick everybody.

The institutional memory of top American milers, so many left at home to watch the World Championships or other major championships on TV after running a fast time earlier in the season then rolling the dice, treating the track in the final at the USA Track & Field Championships like a dice table in Las Vegas, finishing 4th or worse as a result. Unwilling to just attempt to run up to their fitness level and embrace the outcome of that.

The 1500m all but demands a no medals rule. Anything slower than the cut-off time and all you get is a handshake and a pat on the back. No medals. In the final, if you run slower than whatever time was #8 or #10 on the world list in the previous year then to you we say congrats on winning or placing but no medal for you. Sorry, not sorry.

Medals at elite championships should be earned via elite level performances.