TheETG club membership is free and club members receive free coaching exclusively from club owner Marshall Burt [TheETG Packets are available to non-club members for free on the Packets page of TheETG website. The minimum age for membership is 14, there is no maximum. There are -no- qualifying times. Current or past performance level is never a criteria for club membership. TheETG is focused on developing American runners into elite level distance runners and moving the sport forward in the United States.

Please note that the club name is –not– the elite “racing” group. If your focus is on racing, racing, and more racing you’d be extremely unhappy in this club. The club’s focus is development of elite distance running performance rather than the all-too-typically American obsession with racing people into oblivion and running people out of our sport. Our objective is to avoid living up to the reputation American coaches [especially high school and college] have among those in the sport sciences world overseas, being referred to as “the great destroyers of talent”.

American distance runners, male and female, can be considered for club membership…http://theetgtrackclub.com/documents/TheETGmember.pdf

— Conan McDonough [1988 grad of West Potomac High School, Alexandria Virginia]…..when Marshall coached him in high school Conan was All-South in Cross-Country as one of the top runners in the southern quarter of the United States…..joined TheETG 1991.

— Gabrielle [Pohlmann] Patterson [1987 grad of West Potomac High School, Alexandria Virginia]…..when Marshall coached her in high school Gabrielle was 2-time High School All-American in Cross-Country and ranked top 10 in the nation on the track indoors at 3200m…..joined TheETG in 1991.

— Mike Morgovnik [1992 grad of West Potomac High School, Alexandria Virginia]…..when Marshall coached him in high school Mike finished in the top 35 at the Eastern States Championships in Cross-Country…….joined TheETG in 1993.

Some History ——- I burned out on training and racing around 1984 and moved into coaching. My last serious race with some degree of a good fitness level was in college in 1983. I returned to serious training in 1993. I’ll be focussing on the 1500m and 800m events before adding the 5000m and 10,000m and gradually working toward a marathon. I have (2) older brothers [Byron and Jeff]. Byron was a High School All-American in the triple jump, and Jeff competed in distance running in high school and ran at the University of Texas at El Paso during the school s string of multiple NCAA cross-country titles. My parents Moses Jr. and Audrey, both graduated from North Carolina Central University in Durham, North Carolina where I was born.

I ran the second and third Marine Corp Marathons when I was 14 and 15 years old. My race report: the first one I ran at the end of my freshman year [high school] cross-country season. I took a week off after averaging about 18 miles per week in training. At the end of that week, I ran my first marathon. The first 18 miles averaging around 6:20 per mile pace. I then stopped for about 10 minutes to use the bathroom. I did a walk/jog to the finish line. We didn’t have Gu packets, etc, in those days, and I knew little to nothing about hydration and carbo intake during the race. I finished around 3:25. Prior to the second one, I had averaged close to 30 miles per week in my sophomore cross-country season. I took 3 or 4 days off, then ran my second marathon. The second I ran slower in the first 22 miles. I made an effort to keep the stopping to a minimum, thus I finished in around 3:18.

Biggest Influences [other than parents/family]

Middle School [Stephen Foster Junior High] —– my best friend John Martin got me into running. Trained with he and another close and impactful friend, Greg Henry.

– Kung Fu [earned yellow sash in mid-1980’s from a former monk from Korea. His focus was on forms and weapons. I plan to start-up again in Austin at some point.

High school friend Nadim Ahmed has a website that provides extensive information about running trails in the metro area of our nation’s capital, Washington D.C.. The site was originally a book project started around the mid-1990’s. Nadim mapped and measured the courses and provides them in computer format called Running Around Town: Washington D.C..

High school friend Russ McGuire wrote the book Power Of Mobility. Russ has been the Director of Corporate Strategy for Sprint-Nextel. The book is about the future of mobility of phone & computer services and how businesses can use them. 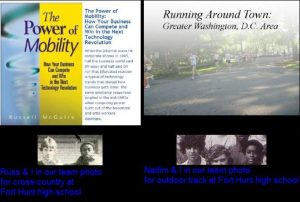