My data driven mantra of the last 2 decades……drug use & drug testing are a sham and a scam.

[Inside The Games, by Nick Butler, Saturday March 10, 2018]—–“The news raises fresh concerns over whether the integrity of the anti-doping process at events, including last month’s Winter Olympic Games in Pyeongchang, have been compromised by the problems.”
“WADA launched an investigation in January following claims that the new-generation BEREG-KIT Geneva security bottles, made by Berlinger, could potentially be opened.

German journalist Hajo Seppelt claimed in a documentary on ARD that they had been able to open sealed containers “without trace”.

WADA recommended that the new version should not be used at Pyeongchang 2018 and that organisers should continue to use the BEREG-KIT 2016, released for the 2016 Olympics in Rio de Janeiro, which they claimed to be satisfied with.”
“It is now possible, however, that even the older version may be susceptible to problems.” 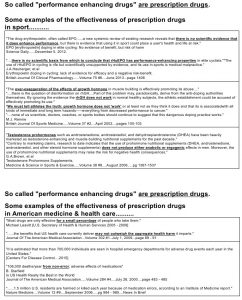