“For decades scientists accepted an “Andean man” model for acclimatization: The body at altitude will grow a higher concentration of oxygen-absorbing red blood cells to mop up scarcer oxygen from rarified air.”

“Earlier this month, however, Beall and five colleagues reported on another distinctive people — a community of Ethiopians who live at 11,650 feet, and whose blood, by several common measures, is exactly the same as if they lived at sea level.”

“……published in the Proceedings of the National Academy of Sciences, Beall’s team reported on 300 people living in the Semien Mountains about 300 miles north of Addis Ababa. Testing showed they had neither elevated red-cell concentrations nor low levels of oxygen saturation in their blood — two key indicators of the Andean model.”

“The Himalayan research triggered a debate over a possible evolutionary explanation for high altitude adaptation. The Andeans, whose lowland ancestors migrated from Asia perhaps 16,000 years ago, adjust to altitude essentially the same way as any lowlander would today…….Tibetans or their ancestors, however, have been in Asia for 1 million years or more — time enough, some scholars theorize, to evolve a different approach. In Ethiopia, the two tracks may converge. Human ancestors first arose there and in Kenya as much as 4 million years ago. If Darwinian adaptation has played a role, there may be no likelier places.”

“In the Semien mountains, Beall’s team tested people of all ages, mostly herders with no particular athletic bent. Unlike the Andeans, their hemoglobin concentrations were the same as those of lowlanders. But unlike the Tibetans, they also had high, sea-level oxygen saturation levels.”
.
by Guy Gugliotta
High-Altitude Breathing May Be In One’s Blood
Washington Post, Monday December 23, 2002 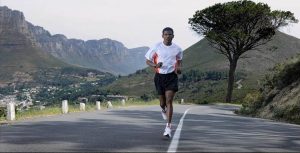